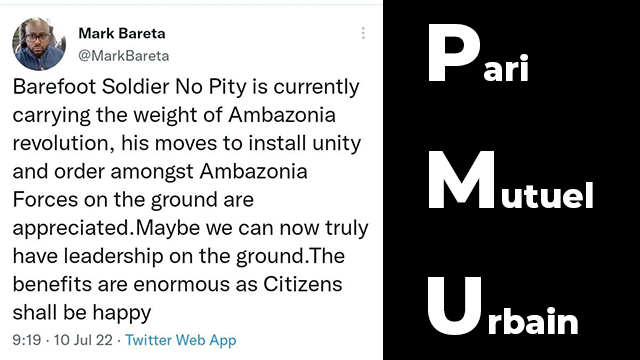 The Ladbrokes of Ambazonia

Their next experiment is in the lab. In times of calm and effectiveness, they feel lost and void of control. GZ is coming to terms with the necessity to work together, be effective, build trust and restore confidence in our struggle. Confidence is destroyed by the unilateralism and illusion of enthroning individuals without consent and a recall mechanism.

All these experiments, void of reason and driven by the singular desire to undermine others assume illusionary power with the hope that they could then force others under them, bringing us near GZ destruction and destroying our reputation internationally. They lack the patience for building, and instead, they are driven by events. Mr. Wirba made a speech in Parliament, and that’s all it takes for them to attempt to enthrone him in Germany. Sako hosted Common sense and became the president of Ambazonia while they plotted and killed General Ivo. The one man who gave us backbone. Murdered Hassan, who built Bui, kidnapped and humiliated General Efang, the one man who made October 1st iconic. Finally, after years of deception, failures, division, corruption, and the destruction of the cohesion in our struggle, they want to exploit a soldier in their mad desire for influence and control.

If there is any lesson we have learned in the past five years is that the absence of accountability in the loss of lives because of these experiments has not deterred these people. We have nearly lost the Menemo area; Moghamo is standing tall thanks to our(ADF) resilience. Fako is nearly lost. Meme is struggling. Mezam is standing strong because of the application of intelligence in managing everyone. Bui is growing stronger, but we can see the flurry of different actors struggling to hijack and redirect. They are building cartels everywhere in their illusion that what failed yesterday will somehow send them to the moon tomorrow. We must guard against these subjective fantasies that have nearly brought destruction to our struggle and embrace endless backdoor discussions that can help us build lasting institutions that will enable success and post-success stability.