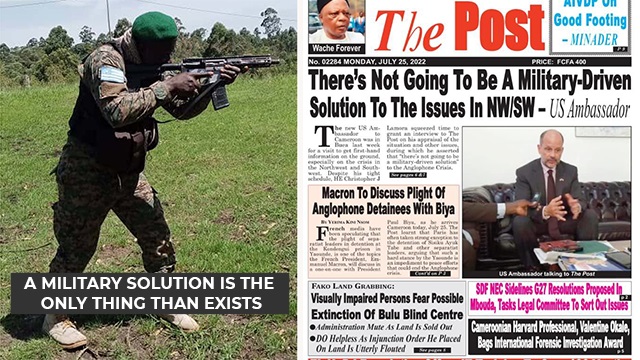 A Response to the US Ambassador

I understand that the Ambassador was speaking to Cameroun. At that same time, Cameroun was moving its old Generals into my country. We are also upgrading our technologies of lethal weapons. Both sides are preparing for war. Cameroun is trying to use its military to reassert political control. We are trying to hold our lines and assert political control through adapted transitional authority institutions. The Ambassador should know this; There is no diplomatic solution to the Ambazonia Cameroun conflict, and contrary to the Ambassador's assertion, there is a military solution. Let the Ambassador be reminded that for 60 years, Cameroun has never negotiated any domestic outcomes with the Ambazonians. It failed to negotiate the implementation of the plebiscite and used political manipulation and force to gradually take over Ambazonia and dismantle everything that made Ambazonia a state. Let the Ambassador be reminded that Cameroun failed to negotiate by instituting a fair electoral system that never threatened its state. Failed to negotiate to allow Mayor's powers over municipalities that never threatened its existence.

Cameroun has only negotiated through litigation the Bakassi Peninsular because it faced a more lethal and reckless military power.

At the time the Ambassador is making this interview, Cameroun is moving murderous Generals into Ambazonia to claim to defeat the last pockets of resistance. Ambazonia controls almost all the suburbs in the Savannah and an increasing number in the Atlantic. Cameroun has been defeated in Ambazonia, and its desperate murderous attempt to maintain military control can never work. Its limited forces are moving from one place to the other, committing massacres, extrajudicial executions, and burning down houses. That’s an enemy that has lost control and has reverted to impunity. DOs can only return to Bui in armour cars or dropped behind our lines by helicopters. Supply their forward basis in Momo requires 10 armour cars to beat Alabukam or drive through Bali. Our forces in Lebialem exercise control. As we saw the other day, General Transporter of Matoh has been exercising increasing control. There is a military solution, and Ambazonia defeated an arrogant power that controlled our lives right into our bedrooms. Now they are hiding in armour cars, driving at night to commit murder. Our people must arm themselves and mop our territory of the remnants of these devils. Let our
People know that Cameroun will never negotiate with us. They consider us enslaved people. For them, it’s outright victory or surrender, and for us, it must be the same.