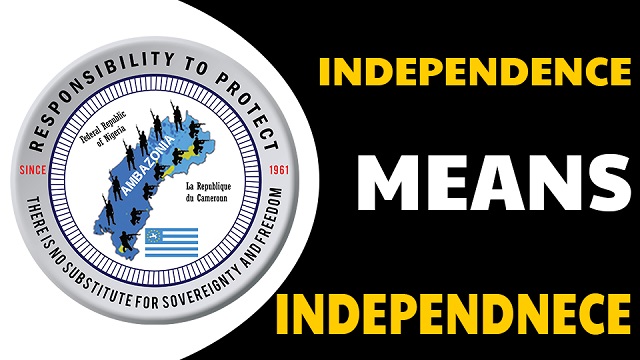 To better understand the origin of the Anglophone crisis, there is a need to have a good mastery of the pre and post-independence era. That history cannot be told without October 1.

In February 1961, Southern Cameroons became independent. This followed the UN-organised disgraceful plebiscite, which had asked Southern Cameroonians, in essence: Do you wish to have INDEPENDENCE (our emphasis) by joining Nigeria or La Republique du Cameroun?

From the initial point of view, Fon Achirimbi of Bafut had dismissed the two Alternatives by referring to the fact that Hobson’s choice of Southern Cameroons was to either join the ravaging “fire” in La Republique or the turbulent “water” in Nigeria. Both countries, to him, were political manipulation and disasters. To that effect, he opted for self-determination, but his words were ignored. And, so, following that post-plebiscite independence, Southern Cameroons officially joined La Republique du Cameroun on October 1, 1961, to form the Federal Republic of Cameroon. From that date, Southern Cameroons, which hitherto became known as West Cameroon, has witnessed nothing but marginalization and domination and subjugation, colonization and discrimination, and cultural genocide from the colonial francophone Republic of Cameroon.

As a result of the francophone Cameroon occupation and colonization, institutions that blossomed and gave a sense of pride to the people were either transferred to La Republique or simply neutralized or crippled. Cameroon Bank, a flourishing bank before reunification, had its headquarters transferred to Yaounde. It was mismanaged, pillaged with impunity, and liquidated. Another vibrant institution, the Produce Marketing Organisation, PMO, which protected the interests of toiling farmers, was transferred from Victoria to Douala, and, then, in Douala, it was mismanaged and eventually collapsed.

“They,” the release said, “gave us the status of enslaved people and beggars. They killed our brothers, beat us up, maimed, raped, looted, suffocated us with teargas, jailed us unjustly, and bleak the future of our children’s education.” According to the established catalog, Francophone civil servants posted to Anglophone Cameroon are considered consuls and referred to as forces of occupation.

As a result of the numerous grievances, Southern Cameroonians have, of late, become radicalized and decided to go about the restoration of the status of the territory ante-1961. This option is eloquently articulated by the Southern Cameroons National Council, SCNC, whose motto is “the force of argument not the argument of force.” They advocate for a return to two states federation. The SCNC argues that Southern Cameroonians are considered as second-class citizens in the affairs of Cameroon. That is why they say no native of Southern Cameroon has ever been appointed to the prestigious and powerful position of Secretary General at the Presidency.

The same was true until recently of the key Ministries of Territorial Administration or Finance, Defence, or Education. Besides, they contend while the union has lasted, “Our union accord has been violated. We have been disenfranchised, marginalized, and treated as an outcast. Our interests have been disregarded, and our participation in national life has been limited to non-essential functions. Our natural resources have been ruthlessly exploited without any benefit accruing to our territory or to its people. Through maneuvers and manipulations, we have been reduced from partners of equal status in the Union to the status of subjugated people. You would imagine that the above subjugation is pretty awesome enough. The Anglophone nightmare has only started,” echoed Anglophone leaders decades ago, a worry which lingers on.

Anglophones today have decided to cry and complaint against the Francophone colonial masters for the “exploitation and rape of our economy, destroying the inherited road infrastructure, mounting ubiquitous checkpoints that restrict free movement, entrenching the policy of divide and rule, marginalization, continuous human rights abuses, discrimination in education and training, domination and the international isolation of Anglophone Cameroon.”

Ahidjo and his colleagues had wanted all anglophones to be annexed into their corrupt French system; although there was clear collusion by Francophone ‘hegemonists’ to annihilate Anglophone Cameroon, Anglophone leaders themselves went a long way to facilitate the dismantling of their State. Politics in West Cameroon was characterized by many internal woes, fruitless squabbles, and backstabbing. Ahidjo, a French colonial master and dubious politician, exploited the internal weakness and division of the anglophones.

In fact, as an aftermath of the aborted Foumban talks, Anglophone leaders proceeded, to a man, in carving their personal political fortunes.

Unfortunately, the Southern Cameroons delegation to Foumban, where they were expected to engineer the Federal Constitution, was composed mainly of Headmasters with little knowledge of Constitutional Law, while French legal luminaries assisted their counterparts from La Republique du Cameroun. The Francophones and their French mentors dictated the terms of the accord. In the end, the Anglophone team merely sold away the State of Southern Cameroons in the scammed Foumbam conference. From all indications, the marriage consummated on October 1, 1961, seems to have hit the rocks. While one partner is lamenting for that tumultuous wedlock to be dissolved, the other partner is utterly silent on the matter. In the meantime, the situation deteriorates. It is a time bomb, someone has said, that is ticking silently.

Paradoxically, October 1, 1961, which was supposed to be a liberating forum for the colonized people of Southern Cameroons, has instead brought agonizing nightmares to Southern Cameroons. After the darkness of 1961, Southern Cameroons died on May 20, 1972, with the dubious ‘Peaceful Revolution’ that transformed the Federal Republic into the United Republic of Cameroon.

Despite the numerous outcry that they had been given a classless deal, President Biya, with the stroke of the presidential pen, in 1984, decreed that the country be renamed Republic of Cameroon! The political evolution had come full circle. Southern Cameroon was, for all intents and purposes, buried. Recently, the Banjul Verdict has greatly criticized the dubious deal for being unlawful. It will be recalled that, after failing to get a hearing from the Cameroon authorities, SCNC activists took the matter to the African Commission for Human and Peoples Rights in Banjul.

The complaints tabled by SCNC and SCAPO “was illustrated by a detailed and photographic catalog of the arrests, detentions, imprisonment without trial, torture, rape, extrajudicial killings, in short, the campaign of state-sponsored terrorism which the people of the Southern Cameroons have been subjected to since October 1, 1961, in flagrant violation of the provisions of the African Charter.”

We are ready to fight till the end until our independence is recognized and guaranteed. We are not the slaves of La Republic of Cameroun, we will fight, and our children will continue the fight until Ambazonia is liberated.